Gov. Asa Hutchinson has appointed Marie Holder of Little Rock as the newest commissioner of the Arkansas State Highway Commission, he announced in a news conference on March 12. Holder will replace the late Tom Schueck, former chairman of the Commission. Holder will serve the remainder of Schueck’s appointment, which will expire January 14, 2021. Her reappointment will begin January 15, 2021, and will expire on January 14, 2031.

“Throughout her career, Marie has demonstrated that she is a sharp businesswoman with a diversity of skills and talents,” Hutchinson said. “She has a passion for her community, public service and leadership. I have known Marie for many years, and I have seen firsthand how much she values the development of Arkansas’ economy and the improvement of Arkansas’ infrastructure. Each of these things has thoroughly equipped her to be the next state highway commissioner, and I am confident that she will be an excellent fit in this critical role.”

Holder is president of Holder Consulting, a position that she has held since 2015. In comments at the press conference, she thanked the governor for his “trust and confidence.” 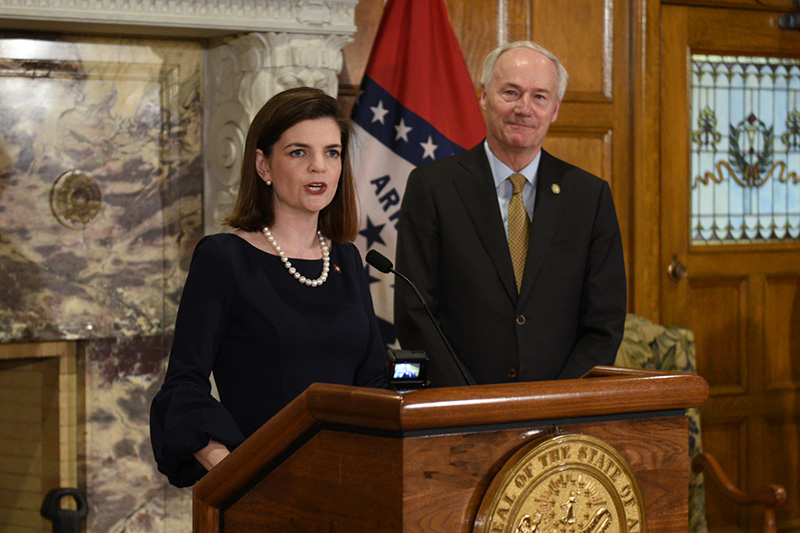 “I am honored to serve the people of Arkansas and Gov. Asa Hutchinson,” Holder said. “As the mother of two children – one of whom is a newly licensed 16-year-old – I will put safety first in every decision I make. As a businesswoman, I will work to promote our transportation system’s fiscal responsibility and transparency. It is a great honor to fulfill the term of Tom Schueck. Chairman Schueck was an excellent advocate for the people of Arkansas and the Second District. I am thrilled to have the opportunity to work with Commissioners Farmer, Gibson, Moore and Taldo, the General Assembly and the governor. Thank you for your trust and confidence.”

Holder has served as a board member and consumer representative on the Arkansas State Medical Board and a fellow of the Federation of State Medical Boards since 2016. Prior to her time with Holder Consulting, she worked as the executive director and communications director of the Republican Party of Arkansas and as the deputy press secretary for former U.S. Senator Trent Lott.

She graduated from the University of Mississippi. Holder currently serves as an elder and has formerly served as a deacon at Second Presbyterian Church. She is the chairwoman of the board at Second Presbyterian Preschool and a volunteer with Arkansas Children’s Hospital Auxiliary and Girl Scouts of America. She resides in Little Rock with her husband, Ryan, and her children, Alexandra and Katherine.