BATESVILLE’S ATLAS ASPHALT, WHERE SUCCESS IS STILL A FAMILY AFFAIR

Atlas Asphalt CEO Mark Lamberth is settled in a conference room in his Batesville office. In the office next door his son Lance is meeting with a project team. As we talk, Mark’s granddaughter wanders in to update her grandfather that she just dropped her car off for repairs. She grins and asks Mark for lunch money, and then warmly hugs him. A few minutes later Mark is on the phone with his wife Dianne, who is getting ready to do play-by-play of Lyon College basketball for the local radio station.

Atlas is a company that is successfully competing for road projects across Arkansas, but at its core this sophisticated company is also very much a family business. With 200 employees working across eight asphalt plants and dozens of job sites, Mark cannot quite remember every employee’s name, but there was a time when he knew every name and phone number. Mark says, “It’s people that really make the difference, and we tend to retain our people.”

After graduating from the University of Arkansas in 1971, Mark and his new wife ended up in Washington where Dianne worked for Sen. Dale Bumpers. After a few years, they packed up and moved back to Batesville where Dianne’s father, Howard House, was already growing a company known as White River Bituminous. Dating back to World War II, White River Bituminous mined ore that the United States was stockpiling for steel production. In 1968 the company shifted to the asphalt business. When the young couple arrived home in 1975, Mark went to work for Mr. House. He started out operating a jackhammer on road jobs and then was promoted to “flag man,” managing traffic at job sites.

Mark eventually helped prepare the job bids to submit to the Arkansas Department of Transportation. He says, “The bids were doneby hand and we would go down with everything in an envelope to submit. This was before cell phones. We would all stay at the old Coachman’s Inn in Little Rock. There was a morning bid opening and if we did not get that we would sometimes scramble to submit a bid at the afternoon session. Then we would all get a burger at Shorty Small’s and head home. It was a lot more fun, but it was stressful.”

In those days, the formation of the Associated General Contractors organization created a platform where companies like Atlas could meet and build relationships with subcontractors that did work like road striping. The industry was getting more sophisticated, but it remained a relatively small Arkansas world where everyone knew each other. Mark remembers friends who lived on the same floor as he did at Yocum Hall on the University of Arkansas campus in 1967 who also ended up in the road building business later.

Early in his career Mark got to know legendary ARDOT Director Dan Flowers who is now the Good Roads Executive Board president. Mark told me, “Dan was tough but fair. He would always listen to both sides and make sure everyone got a fair shot. People had enormous respect for how he ran the department.”

In the 1970s, Howard House, like all his contemporaries in the business, struggled to survive a global oil embargo that ultimately sent oil prices soaring. Asphalt companies often had agreements with the state already in place to deliver asphalt at a set price. The oil crisis made that a complex challenge for the industry. 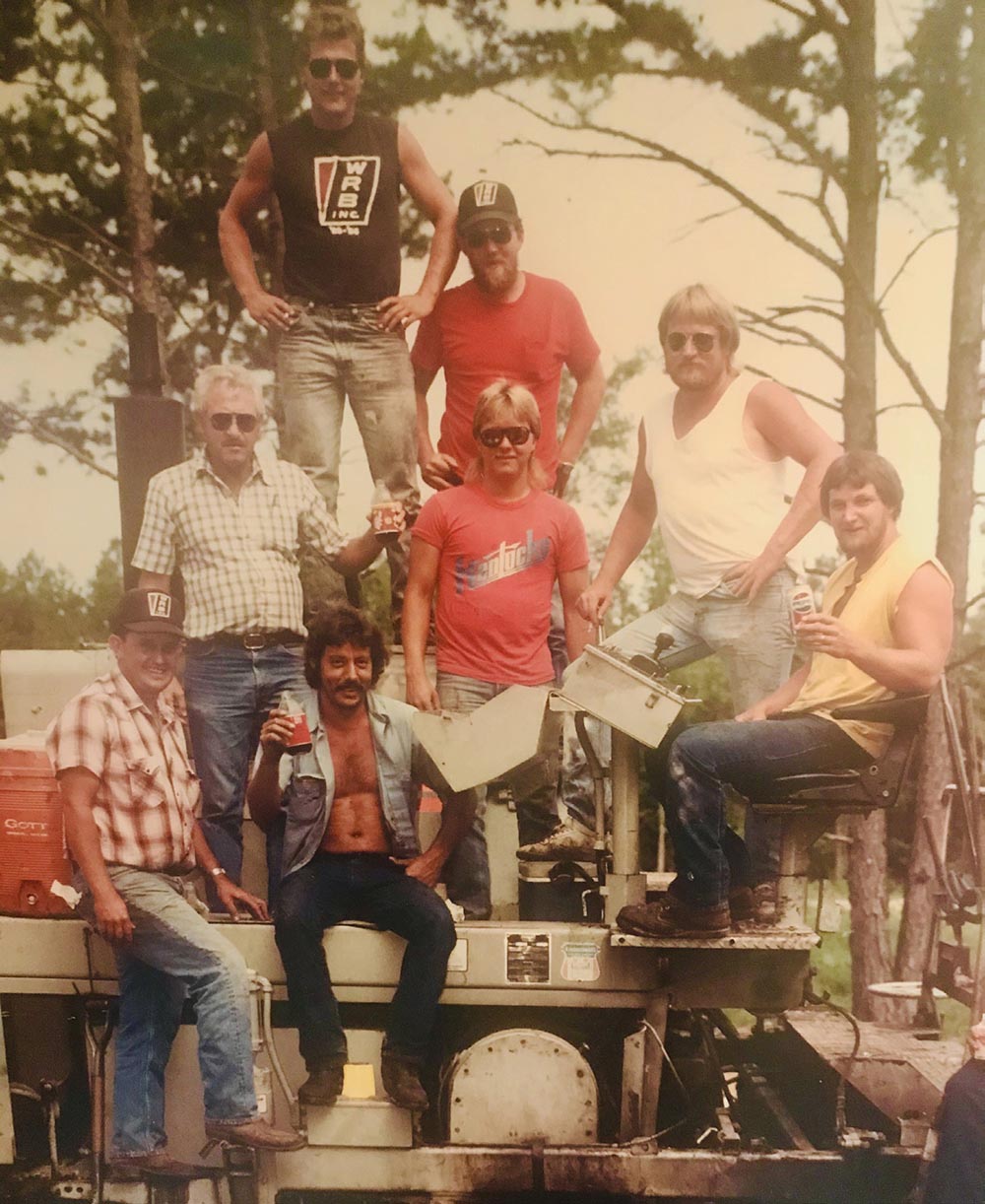 Atlas Asphalt road crew working on a hot day in the 1970s. A number of these early employees stayed and worked for the company for many years.

Mr. House grew his family business when he purchased Atlas Asphalt. Mark says that then and now, a key to the firm’s success has been the ability to change. “There was a time when each company did one piece of a road project, but the companies that survived worked to eventually be able to do everything from moving dirt, to installing the base, to putting down the asphalt. You cannot do just one phase of a project and still make money. We subcontract a few things like traffic light installation, but we are now positioned to do everything else.”

Mark is a much-respected CEO, who is also a Good Roads Executive Board member and sits on the Arkansas Racing Commission. For the past 25 years he has found the time to run a successful business and do other things he loves. He still does radio play-by-play of the Batesville High School football games, and he owns thoroughbreds that run at Oaklawn Park during racing season. But after all this success, he vividly remembers the early days on job sites and the core lesson he learned. “Mr. House expected results. The first time I drove a bulldozer on a job site he spent 30 seconds showing me where the clutch was and then jumped off, leaving me to it.”

The culture of results led to the latest Atlas Asphalt acquisition when the company recently bought Twin Lakes Quarry in Northeast Arkansas. It is another step in the ongoing effort to make sure the company can offer customers all aspects of any job. Mark feels good about the state of the Arkansas economy. “The fact Arkansas operates with a balanced budget holds debt down and makes government more responsible,” he says. “I think the outlook for the road industry is good right now. Arkansas is pretty and it’s still a great place to raise a family.” 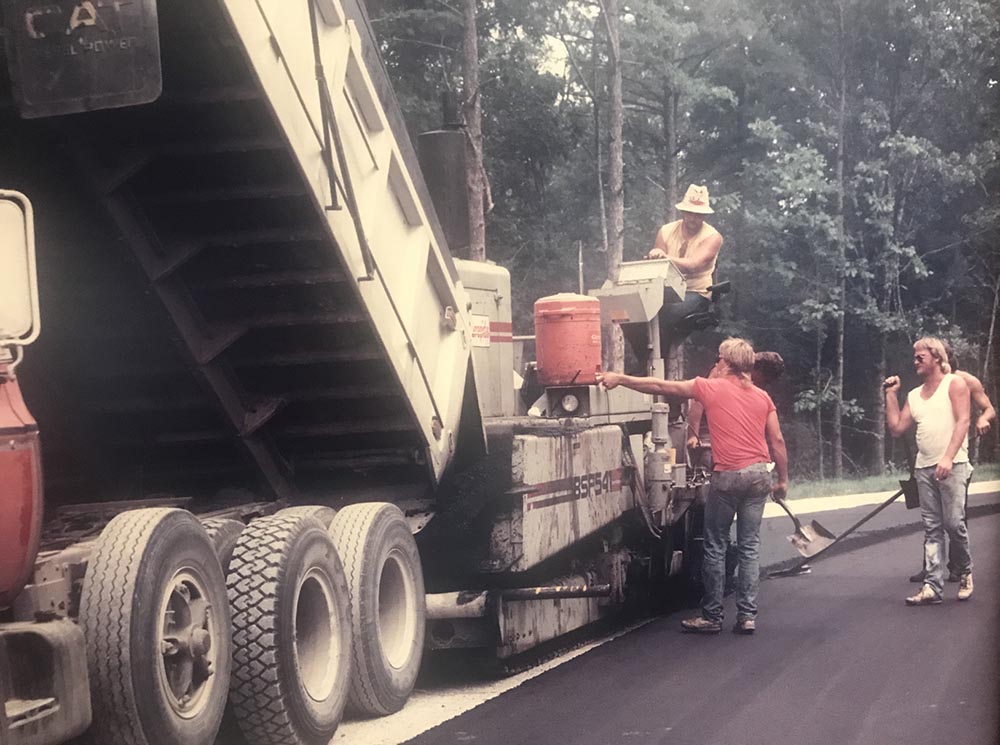 One reason Arkansas companies like Atlas feel good about the future is the fact that Issue 1 passed on the November ballot by a significant margin. It extended an existing sales tax and means millions in continued road funding for virtually every city, town and county in the state. Mark says a bond issue election eight years ago taught him how to best advocate for better roads. “I have faith in the electorate,” he says. “When you hand out a booklet to show the local impact of an issue, every hamlet or large city knows what’s at stake. People understand issues when you show them understandable, tangible information.”

In the 1990s more out-of-state companies started to bid on Arkansas road jobs and the number of local companies successfully winning bids started to dwindle. But in this changing climate, Atlas thrived while remaining family owned, and Arkansas owned. Lance was a highly recruited baseball catcher coming out of Batesville High School and ended up playing at Mississippi State. After a few years traveling with his rock band, Lance came home to the family business. Three of the company’s partners have sons now working in the business, making it well positioned for the future. 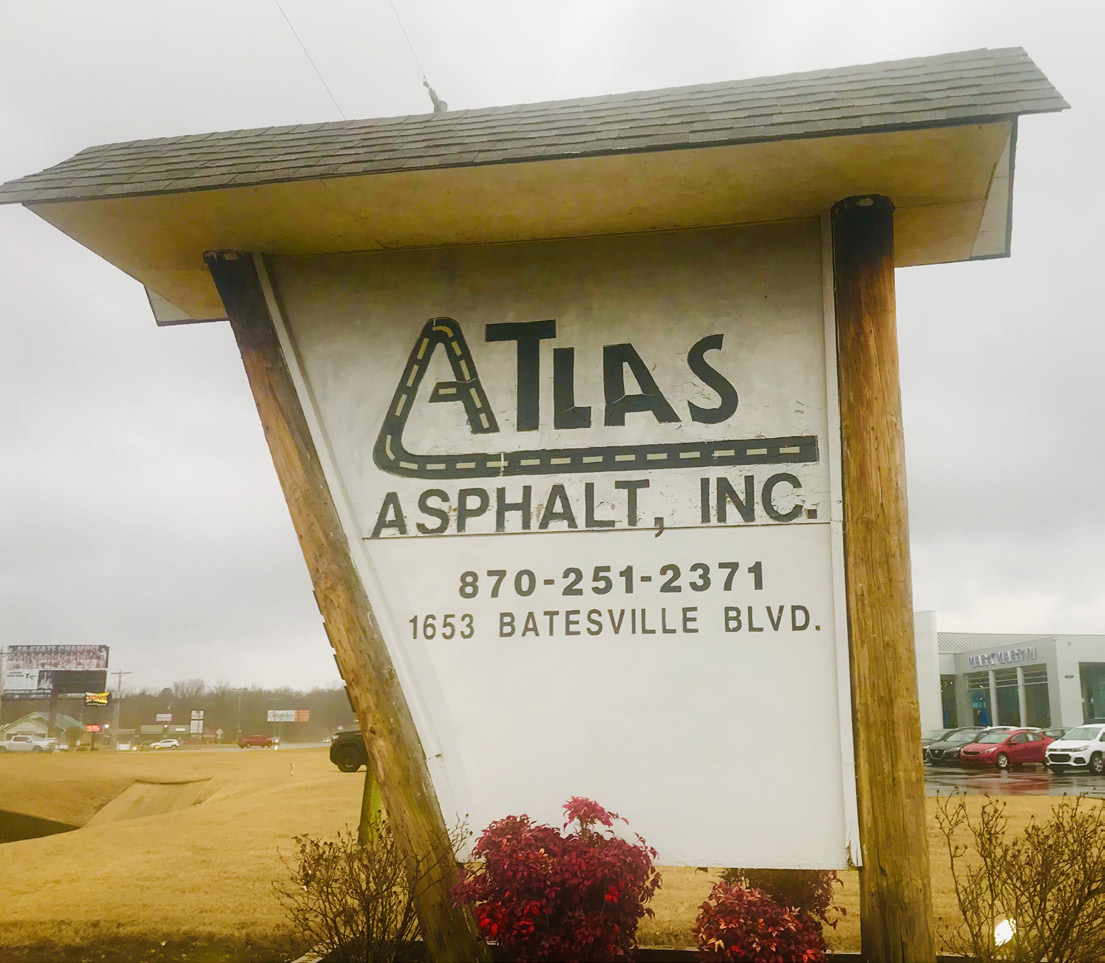 “The fact Arkansas operates with a balanced budget holds debt down and makes government more responsible. I think the outlook for the road industry is good right now.”
– Atlas Asphalt CEO, Mark Lamberth

In the hallway at the Atlas office in Batesville, pictures of road crews from the ’70s and ’80s line the walls. Mark can remember the names of virtually everyone in the photos. He looks at the photos filled with bad 1970s haircuts and can tell stories about each crew member. It is a reminder that one of the reasons this firm is thriving is that the CEO remembers the hot, sweaty days when he stood over a jackhammer in the July heat.

He never stopped valuing the people that have brought Atlas to where it is today.

A MESSAGE FROM ARKANSAS GOOD ROADS PLEASE BE SAFE THIS SPRING