Drive US Highway 82 into Crossett and the size of the sprawling Georgia-Pacific paper mill is what you notice first. GP came here in 1962 after buying the Crossett Lumber Company and 565,000 acres of fertile Arkansas timberland. The facility was expanded in 1976 and upgraded again in 1984. But 58 years later the plant is not the loud, bustling center of a proud industry it once was. In June of 2019, the company laid off more than 500 workers, and 15 months later large sections of the employee parking lot sit quiet and empty. Ashley County Judge Jim Hudson says simply, “The GP layoffs last year really hit us a big lick.” 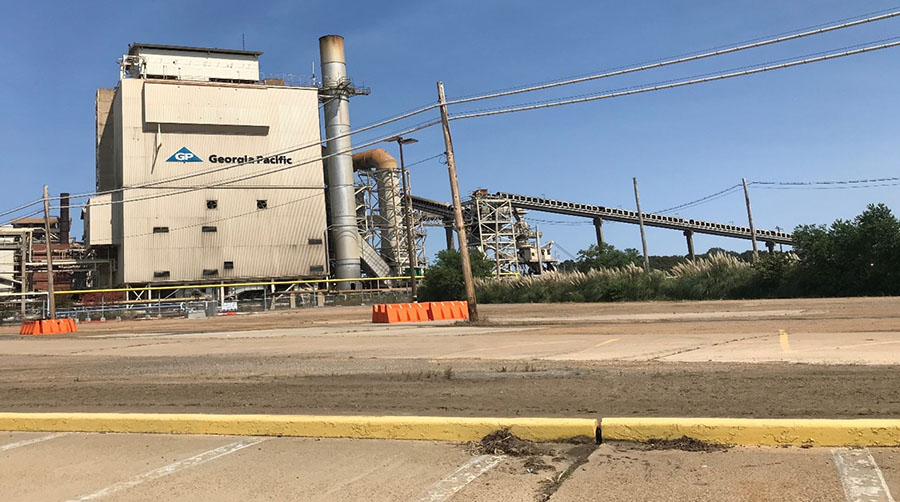 A once busy parking lot sits empty and quiet at Georgia-Pacific Mill in Crossett.

This is the heart of the Arkansas timber industry. It’s also a place to visit if you want an understanding of the link between quality roads and jobs that pay well. Highway 82 is a reminder that the claim that large employers need good roads to move raw materials into production, and finished products out, is not some vague economic policy discussion. It is the difference between jobs that sustain a community, and terse news releases announcing layoffs. It is the difference between hard working families that can pay the rent and those that cannot.

Whether it is poultry, retail, or timber, businesses are looking for safe and accessible roads in good condition when making location decisions. Executives are dealing with multiple communities fighting for absolutely anything that makes them more attractive than the next town. Roads, and the quality of the local workforce, are generally at the top of the list of what matters to a site selection team. If there are infrastructure issues, a company looking for a new location for a facility will generally just move on to the next community being considered in Georgia or Tennessee or Oklahoma.

Beautifully produced recruitment videos will never make up for the cost of hundreds of large trucks having to drive out of their way to avoid deep ruts in rural roads. Friendly chamber of commerce presentations will not overcome seasoned truck drivers saying a specific road is dangerous after dark. A mayor who brags about his community is no match for the cost of an agriculture operation having to drive nine extra miles to avoid a structurally deficient bridge.

Critics cling to the tired talking point that companies that design, fund, and build roads are just in it for the business. Those companies are certainly expected to turn a profit, but the Arkansas Department of Transportation manages an exacting planning and approval process. Sit through a Wednesday morning highway commission meeting, and you will see there are too many real needs in a small state for the commission to approve roadwork merely to help any contractor’s bottom line. Long ago the Arkansas Highway Commission was structured in a way that keeps politics out of road building.

People who make the claim have probably never watched a Georgia-Pacific truck filled with tissue products roll out of Crossett. They have likely never watched a laid off mill worker walk out of a plant for the final time.

If you drive 425 north out of Crossett and pass through small towns like Fountain Hill and Lacey, it is clear it’s not just Crossett’s well-being tied to the timber industry. A little more than 40 miles from the deserted Georgia-Pacific parking lot, the Western Sizzlin’ restaurant in Monticello is also quiet. There are six socially distanced customers eating from the once huge buffet that has been reduced to about a dozen items by new COVID safety regulations. The 500 Georgia-Pacific employees laid off last year now spend less money at restaurants like this. They also spend less on groceries, cars, and any of the mundane things that make up a family budget.

The small, mask wearing group at the old school restaurant is like the Georgia-Pacific parking lot, a reminder that with COVID and layoffs, many communities in Arkansas are struggling. They need a message that they are not alone, that they are a part of a larger community that understands deer hunting, high school football, the value of a local employer, and why quality roads can help generate new jobs, or keep existing jobs.

On this day, there is some good news. At the intersection of US Highway 425 and US Highway 82, Arkansas Department of Transportation Director Lorie Tudor presides over a ribbon cutting to open the new four lane section of US 425 that runs to Louisiana. It’s the result of something mill executives have been telling local leaders for years, that it needs to be easier and cheaper to put finished product on trucks in Crossett and send it to the world. Tudor tells the crowd, “This $26 million dollar project widened more than five miles of U.S. Highway 82 to four lanes. Hamburg, Crossett, and Ashley County will all see economic benefits from this work.” 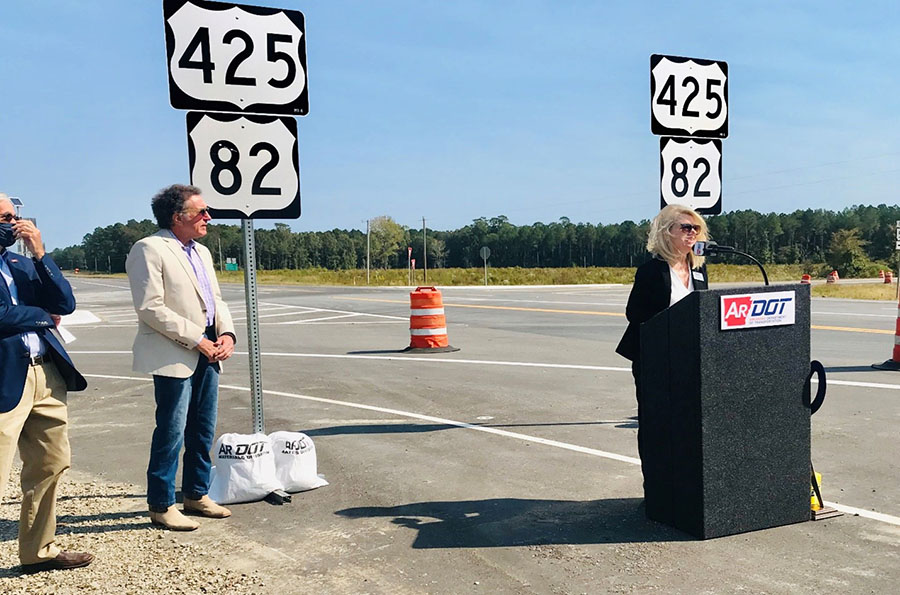 Arkansas Highway Commission Chairman Robert Moore seems to know everyone who shows up for any highway event. He is a south Arkansas legend who prefers jeans and boots at events like this when he advocates for struggling small towns. He is quick to remind people that better roads matter for many reasons. Moore says, “They help us create connectivity for citizens, tourism, and the trucking industry.”

Moore and State Senator Eddie Cheatham were advocating for the expansion of this road more than a decade ago. Cheatham understands what’s at stake here when he explains, “Georgia-Pacific has complained for 10 or 15 years about the need for better roads to move product out. This is a blessing for us. It’s pretty simple that without road upgrades we won’t get new jobs for our people.” 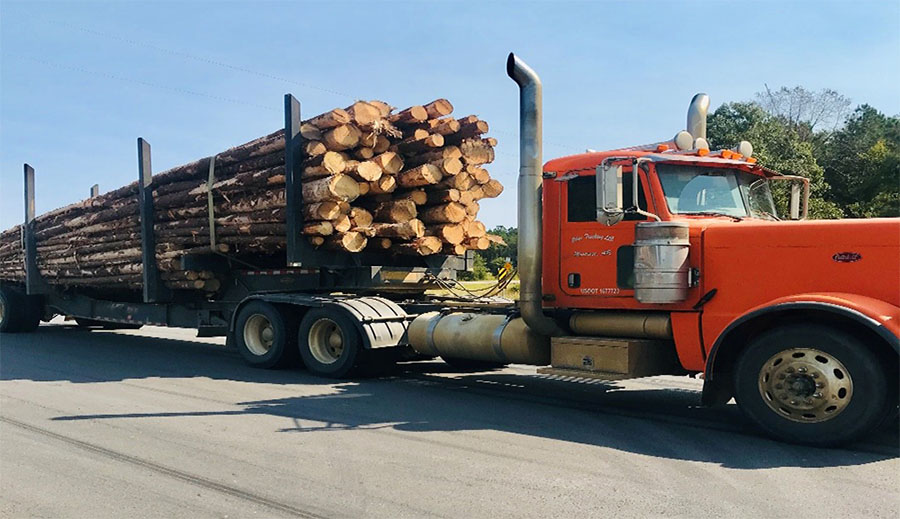 Driving a fully loaded tractor trailer filled with paper products is generally easier on an interstate than it is on Ashley County roads. This is especially true if a road is older and deteriorating. Arkansas Trucking Association President Shannon Newton knows what her drivers worry about, “Shoulders are the first thing to wear out on roads and that creates a situation where a truck can slip off the road. On older country roads we also worry about turning radius. All of this means there is extraordinarily little room for error.”

Johnnie Bolin is a former legislator, and a former Executive Director of Good Roads, who lives about five miles from where we are standing for the ribbon cutting. He is wearing a mask, but you can see his eyes smile as he proudly looks over the four new lanes that will take paper products to Louisiana and says, “When we moved here in 1954 this was just a gravel road.

The funding to improve this road came from passage of a half-cent sales tax in 2012 that will soon expire. In November Arkansas voters will decide on extending that tax to help pay for road and bridge projects desperately needed in towns like Hamburg and Crossett. Work that will hopefully change the economic tide for this region. After the body blow of more than 500 lost jobs in 2019, there was new hope in January when the paper company said it would spend $37 million to upgrade the technology and infrastructure at the historic Crossett Mill.

The Highway 425 upgrade was a step in the right direction in terms of sending a message to the mill that local and state leaders like Tudor, Cheatham, and Hudson are listening to what business needs to stay here.

Randy Zook understands why communities need to send messages to business. For more than a decade he has been the President and CEO of the Arkansas State Chamber of Commerce. Unlike some chamber leaders, Zook never hesitates to offer a blunt assessment of what any community needs to be doing to create jobs, “Education, infrastructure, and quality of life are the three critical elements to a community attracting or keeping jobs. Sometimes people are willing to pay for the roads they drive on each day but not willing to support other regions. The whole state needs to remember that investing in infrastructure is as important as investing in people and education.”

When the ribbon cutting speaking lineup is complete, and the pictures have been taken, Lorie Tudor grins after doing an interview with a local tv reporter. She says, “Of everything I heard here today, the absolute best sound was those big timber trucks rolling by as we cut the ribbon.”

Spend a day here, very far from the world of blue suits and receptions at the state capitol in Little Rock, and you are reminded that the sound of a fully loaded timber truck rumbling past a ribbon cutting ceremony is also the sound of a region fighting for its future.

In the simplest of terms that is what Issue 1 is all about.

HOW THE NEW INFRASTRUCTURE BILL SHOULD IMPACT ARKANSAS