ON THE TRAIL TO THE FUTURE

Brendan Quirk was selling bicycles on the internet when many Americans really didn’t understand you could buy anything online. He steadily grew Competitive Cyclist, his Little Rock-based bicycle business, for 12 years, and then sold it to backcountry.com.

He moved his family to Utah to work for that company, and then made a career shift to join the executive team at Rapha, a London-based cycling apparel brand. His life has come full circle now as he’s back in Arkansas thinking through strategies to grow both on-road and mountain biking.

The Bentonville-based Runway Group led by Tom and Steuart Walton is focused on how Arkansas can do unique things to revitalize public spaces and improve the quality of life in any community. Quirk is part of a Runway Group team working in casual offices overlooking the Bentonville town square.

Quirk believes all Arkansas communities should be integrating bike and walking trail strategies into discussions about economic development and quality of life. A recent economic impact study shows that in 2017 alone biking trails in Benton and Washington counties resulted in $137 million in economic activity.

“If you live in the upper Midwest, you can’t ride bikes in the spring, so folks come down here because of our reputation for fantastic riding and fun things you can do off the bike. Bentonville gets covered up in cars with license plates from Illinois, Minnesota, Michigan and others,” Quirk said. “We’re really starting to get known for our riding and all the other things we have to offer. It’s part of our identity and culture.”

Northwest Arkansas bike trail development started modestly in 2007 when Sam Walton’s grandson Tom started laying out the first trail with a pick and shovel. Today that work has expanded to more than 400 miles of trails that benefit the region in terms of better health, local business development with stores selling helmets and bikes, and tourism growth with riders filling local hotels and restaurants. That first simple trail is now part of a much larger system that features some of the most sophisticated mountain trails in the country.

In some ways the discussion of how to integrate walking and biking trails into the fabric of a community is part of a larger and longer-term road discussion facing all states. Transportation is changing rapidly, and future generations will want to get from one point to another without dealing with traffic lights or parking. Ride-share programs will only continue to grow. Quirk says the model of one car per Arkansan isn’t going away anytime soon, “but we need to think about how we are going to build highways that are future proof. We need to build roads that can handle all modes of transportation.”

The rapidly growing system of bike trails in Arkansas is in large part due to a changing culture, but it’s also advancing because bikers have found support among the 135 legislators at the state Capitol. “There is a cycling movement in Arkansas that is happening fast, and we are easily in the top 20% of bike friendly states nationwide,” Quirk said. “Governor Hutchinson has shown amazing leadership in supporting this effort, and Arkansas Parks and Tourism has been fully engaged from the start.”

During the 2019 legislative session, Arkansas lawmakers unified behind several measures to make the state bike friendly. The “Idaho Stop” bill was passed that allows riders to treat a stop sign as a yield sign, and a red light as a stop sign. The law makes it safer for riders to pass through intersections and keeps bike traffic moving.

Two years ago, the legislative support was evident when the General Assembly passed one of the most wide-ranging measures in America to allow the use of electric bikes (e- bikes) anywhere. An electric bike has a small motor that allows the bike to gain speed as the rider pedals faster. Arkansas is now allowing electric bike riders in state parks when some states have resisted that. Quirk sees Arkansas legislators sending a message to tourists and residents alike that the state is supportive of both on-road and mountain bikers. 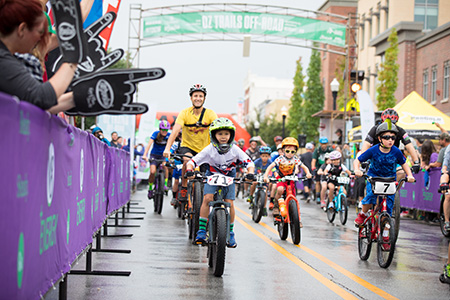 Quirk says any community or county in Arkansas can get involved in this effort to attract more sales and tourism dollars with both paved trails and mountain trails. Currently a number of federal grants are available for communities exploring the installation of paved trails.

“There are a lot of elected officials who have gone to the wars on federal grants,” he said. “They understand how to apply for these grants. There are plenty of county judges and planning commissioners who know how to navigate that maze. The first thing any elected official should do is look in their Rolodex for the names of people they can learn from. Reach out and you will learn a ton.”

If a community does get trails installed, there is a need to build programs to make sure families can access bikes and trails regardless of income level. Off-road bikes can be expensive, but a growing number of programs collect used bikes and refurbish them for kids. Pedal It Forward is a Northwest Arkansas non-profit dedicated to providing bikes to people of all income levels and helping the sport avoid the stereotype of mountain biking being just for affluent families.

The Jones Center in Springdale is an example of a facility providing readymade access to cycling. A mountain bike skills park and a pump track sit across its parking lot, and it’s a short ride to the immensely popular Fitzgerald Mountain Trail. Quirk calls it “one of the most beautiful trails in all of the Central Time Zone.”

The growth of trails is happening at both the state and local level. The Arkansas State Park system recently announced its Monument Trails program – a plan to open world-class mountain bike trails in six of its parks. The first Monument Trail opening was unveiled at Hobbs State Park in June, and work is underway at Mt. Nebo with four more systems to come after that. 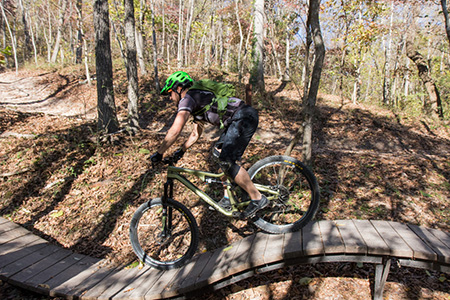 The River Trail in Little Rock has been a huge success. And the county judges in Pulaski, Saline and Garland counties have come together to rally support behind the proposed Southwest Trail.

Quirk says former Pulaski County Judge Buddy Villines has an “amazing legacy” of committing to trailbuilding long before most communities were even thinking about cycling. “The River Trail in Little Rock and North Little Rock is an Arkansas gem,” Quirk says. Similarly, Northwest Arkansas’ Razorback Regional Greenway brings together multiple communities and gives riders of all levels access to a safe, enjoyable riding environment.

In Arkansas the public and private sectors are working together to send a clear message that the state understands how local communities will benefit from trail system strategies that integrate with road and bridge strategies.

The one major thing any company is looking for when evaluating a site to locate is the ability of a community to offer a high-quality workforce. Without that workforce, it’s virtually impossible to attract new employers.

A thriving bike trail system can be an important element of the package a city or town uses to sell itself. Bike trails help attract and retain a new generation of workers looking for flexible work schedules, craft beer, trails and other amenities.

On a recent overcast afternoon, Quirk is sitting in his office talking about eight people from Norway who just came to Bentonville to study how the bike economy has exploded here. He says wherever he goes in the country or world people tell him, “I want to come to Northwest Arkansas and ride my bike.” At trade shows, bike trails are now seen as a defining feature of any community.

Quirk was raised in Little Rock, where his father was a physician at UAMS. He is amazed at some of the things happening in Northwest Arkansas, but quick to point out that Little Rock or any other city or town in Arkansas can also generate the new revenues that come with bike trails. It’s often more about a culture change than it is just about resources.

When not meeting with bike tourists, Quirk finds time to ride 50 or 60 miles on weekends. Some days his 14-year-old son rides with him. As he pedals, he sometimes thinks about what is happening here. “There is a movement about cycling in Arkansas that is happening very fast and with great innovation,” he said. “There is also more public-private collaboration than we normally see. How we are pushing this is becoming a defining characteristic of our state.”

ROAD PANEL STUDIES WISH LIST; WORK ON I-30, I-40 AMONG PROJECTS IF TAX MADE PERMANENT RAZORBACKS & ROADS: THEY’RE AMONG THE SUBJECTS JACKSONVILLE MAYOR BOB JOHNSON IS THOROUGHLY PASSIONATE ABOUT